The Beast, The End Times, The Great Consummation, The Great Tribulation

Why do so many End Times teachings get the timeline for the Great Tribulation wrong?

For more than two millennia the Christian world has been kept in a place of prophetic blindness with regards to portions of the End Times message.  Only a portion of the End Times information was released by God BEFORE the biblical period known as, “The Time of the End”.

Israel’s reemergence as a nation on its ancestral lands and with its original ethnicity and religious beliefs took place, EXACTLY as predicted, after more than 1800 years in exile.

Below are four sections of scripture which allude to the fact GOD ordered portions of the End Times message to be concealed AND that that message would only be released at, “The Time of the End”.

The reason “The Time of the End” is even being discussed is to confirm God intended “New Revelation” to surface just before the Great Tribulation of the Great Consummation.

The Angel Gabriel tells Daniel about events which will take place specifically at the time of the end (Daniel 8:19):

“And the vision of the evenings and mornings which was told is true; therefore seal up the vision, for it refers to many days in the future.” (Daniel 8:26; NKJV)

The Angel Gabriel gives Daniel a vision which will allow Daniel to see spiritual events from a perspective at the beginning of the Great Consummation.  This vision parallels John’s vision in Revelation 10:1-7:

Although I heard, I (Daniel) did not understand.  Then I said, “My Lord, what shall be the end of these things?”

And he (Gabriel) said, “Go your way, Daniel, for the words are closed up and sealed till the time of the end.” (NKJV)

I  saw still another mighty angel coming down from heaven, clothed with a cloud. And a rainbow was on his head, his face was like the sun, and his feet like pillars of fire. He had a little book open in his hand. And he set his right foot on the sea and his left foot on the land, and cried with a loud voice, as when a lion roars. When he cried out, seven thunders uttered their voices.  Now when the seven thunders uttered their voices, I was about to write; but I heard a voice from heaven saying to me, “Seal up the things which the seven thunders uttered, and do not write them.” (NKJV)

Bare in mind, the Scriptures listed above categorically speak to the same event, the Great Consummation and The “Time of the End”.  The visions given in Daniel 8:11-26 and Daniel 12:4-11 specifically state they are related to the Time of the End with Daniel 12:5-7 mirroring the vision found in Revelation 10-1-7.

Okay, onward to the Great Tribulation of the Great Consummation timeline.

Though most Christians when thinking of the End Times period think of the term, “The Great Tribulation,” this author has changed the name within his texts FROM the Great Tribulation to, “The Great Consummation”; reason being, the term is more accurately descriptive of what God is doing during the last 3½ years of His great plan for Christ’s Covenant.

Now… back to the timeline.

Here is what we NOW KNOW to be true:

Of those 37 sections of scripture WE KNOW 18 categorically include the expressions, “The Day of the Lord or the Day of Christ”.

However, we also KNOW the sun, moon and stars WILL BE darkened when the Day of the Lord begins.

Of equal importance, collectively the 18 times for “the Day of the Lord” and the 16 times for “the sun, moon and stars being darkened” overlap no less than 8 times.

So here is what we know… the Day of the Lord begins with the sun, moon and stars being darkened.

Why is that important?

Scripture must agree with itself.  Regarding the End-Times in this Post, we have been presented with only two elements or expressions from “The Day of the Lord Chart”, but the Chart cross-correlates 40 expressions with 37 sections of scripture related exclusively to the Great Tribulation of the Great Consummation.

Let’s see what these cross-comparisons reveal in the following excerpt taken from page 259 of “This Side of the Whirlwind, the Coming Apocalypse”.  In the example below we restricted the information to just those scriptures within the Chart that are specific to “The Day of the Lord”.

The Day of the Lord Compilation and Criteria Chart

If the Bible was simply written by men, such connectivity between unrelated sections of scripture would be fantastic. However, the presence of such widespread connectivity within unrelated sections of scripture suggests a semblance of collaboration from the divine, God’s hands at work. Bear in mind, the Bible is comprised of 66 books written by 40 authors over a span of thousands of years. Such diverse authors, eras and text demonstrates God’s omniscience and reveals to His people another portion of His plan for the Great Consummation during the Latter Days. As His children discover the relationships between these and other sections of End Times scriptures, we are able to glean a better understanding of God’s overall message, purpose, and plans for the Latter Days. What was hidden is now being revealed.

The beginning of the Day of the Lord is the day of the Second Coming of Christ and the day of the Rapture. The Body of Christ will be here during the tribulation portion of the Great Consummation. However, Christians will not be on earth during the Wrath of God. It is true the Wrath will take place during a portion of the Great Consummation, but it is not true the saints will endure even a moment of God’s Wrath. 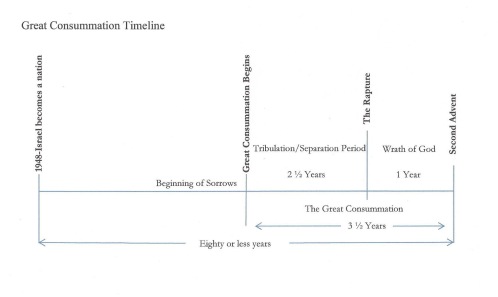 We’ll continue with, “The Decimation 9B” next time.

Have a blessed day!

1 thought on “The Decimation 9A”