7 Years of Judgment, God is Great!, Hearing God's Voice, Love, Prophecy, The End Times, The Great Consummation, The Great Tribulation, The Latter Days, This Side of the Whirlwind 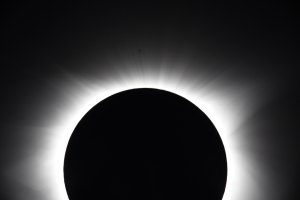 Wouldn’t you LIKE to know the TRUTH about these and other critical issues COMING OUR way in the next few years?

THEN – it is time for you to jump into this blog FIRST!

And when you have read with your own eyes the glairing truths that cannot be denied “THEN” it will be time for you to get your own personal copy of, “This Side of the Whirlwind, The Coming Apocalypse!”

“This Side of the Whirlwind” – By Divine Revelation – brings you the ONLY SCRIPURALLY CONFIRMABLE truths (thus-far) relating to the End of Days;

The following excerpt from, “This Side of the Whirlwind, The Coming Apocalypse” chapter 13; subsection “The Seven Seals” pages 199-201) provides an amazing glance and insight into God’s long-game for the salvation of His Children {Past/Present/Future}.

I hope you are able to read it with EYES OPEN!

Understand, the opening of the little book with the seven seals is the literal opening of God’s agenda for the END of the Time of the Gentiles or end of the Church Age.

Opening the seven seals represents tangible actions not only in the heavens but also here on earth.

Because we, the world, are already in the Beginning of Sorrows… Some of the Seals are currently in play…

Exciting times we live in Christians.

I absolutely would not want to live “at this time” without knowing Jesus as my personal Lord and Savior. NO Thanks!

At the appropriate time, God will call for the opening of the little book locked with the seven seals, as mentioned in Revelation 5:1–14. The seals unlock a series of events designed to put God’s agenda for the end of the Latter Days into action. In verse 2 of chapter 5, an angel cries out, seeking anyone worthy to open the seven seals and set into action the agenda for the beginning of the end. When the search begins, no one worthy can be found to open the book or initiate God’s program. Chapter 5 outlined a sequence of events that supports split-versing and corroborates its use in the covenant of Jesus Christ as taken from Daniel 9:24–27. By opening the seven seals, the final components necessary for completing all prophetic visions and prophecies are put into action. Each of the seals relates to the end of the Time of the Gentiles. The first four seals launch the Beginning of Sorrows, which will begin before the Great Consummation. By the end of the Great Consummation, the last two seals will be fulfilled, along with the last two edicts, bringing the Wrath of God to a close.[1]

The opening of the seven seals releases a series of global measures intended to bring the Time of the Gentiles and the covenant of Jesus Christ to its consummation. The message and its purpose are fulfilled and completed during this last generation of the Body of Christ born during the Time of the Gentiles and the period known as the Latter Days.[2] The seven seals create an environment designed to challenge each Christian’s commitment to Christ during the Tribulation Period of the Great Consummation. Ultimately, this crucible will provide the Bride of Christ with the means to make herself ready for her Bridegroom in accordance with prophecy.[3] One function of the process separates true Christians from pseudo-Christians, preparing the Body of Christ for the Rapture and the Marriage Supper of the Lamb. For those left behind, the pseudo-Christians[4] and the secular world’s unsaved, the opening of each seal establishes the same environment but results in validating God’s righteous judgment over the lives of those who have rejected God’s[5] free gift of salvation as well as those who take pleasure in unrighteousness (2 Thessalonians 2:8–12). Mistakenly, Satan believes the End Times is his agenda for the Latter Days. But in truth, it is God’s program, which allows for the unsaved to fully and freely embrace their individual styles of wickedness so they will be judged by their individual rebellious behavior.[6] In point of fact, God ordained this agenda as is confirmed in 2 Thessalonian 2:8–12 and Revelation 17:17. When all seven seals have been opened, the blessings and curses requirements for completing the covenant of Jesus Christ will be utterly satisfied for both the saved and unsaved populations of the earth.[7] By the end of the Great Consummation, every vision and prophecy related to the Seventy Weeks of Daniel and Latter Days will be accomplished (Daniel 9:24–27). Even as the Body of Christ has been saved, similarly the unsaved population of the world will have reached its full measure of wickedness and received objective judgment. Each seal corresponds to a series of events as outlined in the following chapters: Matthew 24, Mark 13, Luke 21, Revelation 6, and Revelation 8. Parallels confirming the connections between each of these five chapters are illustrated in the seven seals Correlation table found near the end of this chapter.  “This Side of the Whirlwind: pages 260-261)

In order to fully understand the implications in Revelation 5:1–14, it is important to first recognize John is seeing prophetic events both past, present and future. As evident to this assertion, the text, though written after Christ’s ascension, is referring to Jesus before and after His crucifixion. It is essential to distinguish the intended differences, which separate the two distinctions surrounding Jesus the Christ as portrayed within the first seven verses of Revelation 5. The first distinction is seen in verses 1 through 4. 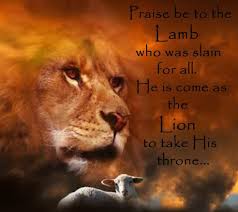 Though Jesus is not specifically mentioned by name, the passage is referring to Jesus before His crucifixion. When the text in verse 2 calls for (anyone) “… who is worthy to open the scroll and to loose its seals,” it is not simply calling for Jesus Christ. Jesus was alive and well, ministering in Israel when the angel cried out and no one was found worthy either in heaven or on earth or under the earth (Sheol, the grave) to come and take the little book. Because Jesus had not yet died for the sins of the world, He had not yet fulfilled several necessary edicts required to qualify Him as worthy to open the book or unlock its seals. Verses 5, 6, and 9 confirm these requirements, for only after Christ had been slain for humanity did He become worthy to open the little book.

In the first four verses, though Jesus was the Christ, “the Lamb of God,” He had not yet died for the sins of the world. Jesus had not yet fulfilled the required edicts listed in the Seventy Weeks of Daniel prophecy.[8] Fulfillment of the first four edicts was a requirement for completing the first half of the covenant, a part of the Christ’s ministry and the covenant of Jesus Christ. Because Jesus was not yet the Lamb slain, He was not yet found worthy to open the book or release its seven seals. For this reason, the first embodiment of Christ in chapter 5 relates to Jesus the Christ, the Lamb of God, who was not yet slain for the sins of the world. The distinction benchmarks the time frame to a period before Christ’s crucifixion. The angelic beckoning was given during the first half of the seventieth week, sometime before Jesus died for the sin of the world. The event established a time stamp for the prophecy’s fulfillment.

And I saw in the right hand of Him who sat on the throne a scroll written inside and on the back, sealed with seven seals. Then I saw a strong angel proclaiming with a loud voice, “Who is worthy to open the scroll and to loose its seals?” And no one in heaven or on the earth or under the earth was able to open the scroll, or to look at it. So I wept much, because no one was found worthy to open and read the scroll, or to look at it. (Revelation 5:1–4 NKJV) 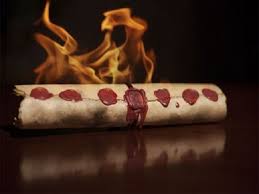 Verses 5 and 6 reveal the second embodiment of Christ. In these verses, Jesus is perceived as “… The Lion of the tribe of Judah, and the Root of David.” The phrase, “The Lion of the tribe of Judah” alludes to the Christian priesthood where Jesus is seen as a priest after a new order, the order of Melchisedec.[9] Jesus is the chief priest, forming a new and better covenant based in faith rather than works. In His role as chief priest, Jesus is perceived as the Lion of the Tribe of Judah, the Maker of a new and better covenant. The phrase, the Root of David relates to Jesus as both the root and the branch of David. As David’s Creator,[10] Jesus is the root of David. As David’s descendant, who will sit on the throne of David in accordance with the Davidic covenant,[11] Jesus is the branch.[12] The manifestation of Christ presented in verses 5 and 6 is an embodiment of the new covenant. In these verses, Jesus is the Lamb of God slain for humanity. The imagery in verses 5 and 6 relates to the prophetic fulfillment of the first four edicts taken from Daniel 9:24, which placate the laws of Moses, abolishing or washing away all impartation of sin through His shed blood. In verse 6, Jesus is seen as, “… A Lamb as though it had been slain, having seven horns and seven eyes, which are the seven Holy Spirits of God sent out into all the earth.” This is Christ’s evangelical mission statement for the Church Age. The symbolism taken from verses 5, 6, and 9 further presents Jesus as the Messiah and the only one who is now worthy to receive and open the seven seals. Jesus has become the Savior, Christ, and Messiah.

Excerpt will continue in “Divisions Made Splittingly Clear Part 2”

To ask questions or get further information feel free to contact us at:

[1] Matthew 24:4–10—After the beginning of sorrows, “then” they will deliver you up to tribulation, kill and hate you.

[5] 2 Thessalonians 2:8–12. When Jesus is taken out of the way, Satan is free to deceive his children as he sees fit.

[6] Genesis 15:16, God did not bring judgment on the Amorites until they had reached their full measure of iniquity.

[8] Daniel 9:24–27, “To finish the transgression; to make an end of sins; to make reconciliation for iniquity; to bring in everlasting righteousness.”